On the Stage of the World and the School by Play

The permanent exhibition on John Amos Comenius has two parts that are incorporated into one circuit.

First part, On the Stage of the World. John Amos Comenius and His Times, was opened in 2022.

The second part, School by Play, was redeveloped in 2017.

1) On the Stage of the World. John Amos Comenius and His Times 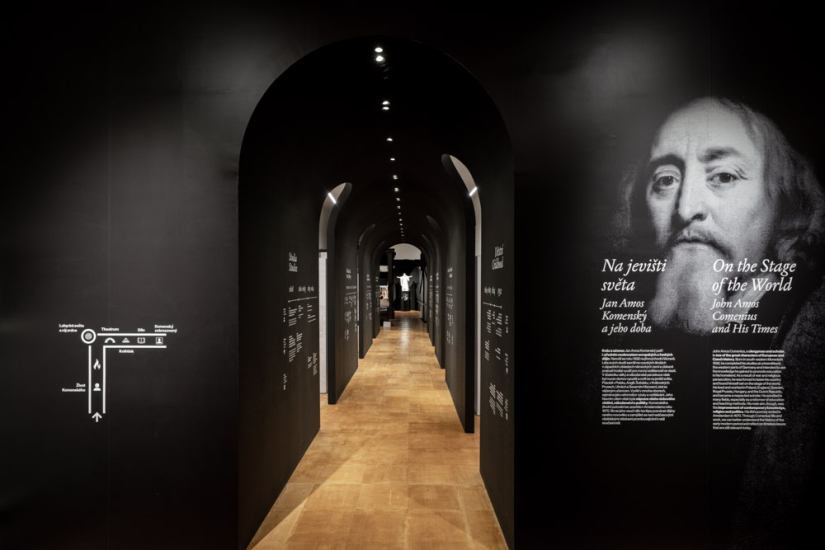 Note: the photos of the exhibition were taken by Martin Zeman, www.datelier.cz

The permanent exhibition dedicated to the life and work of John Amos Comenius was officially opened on March 28, 2022, on the occasion of the 430th anniversary of his birth. The new exhibition has crowned the endeavor to remodel the museum’s exhibition premises into the form that meets current museum standards, provides visitors with greater satisfaction levels, and speaks a contemporary language.

In a total of five parts, the exhibition presents Comenius’ times and his place in the then-society, but also his work, through which it is possible to reflect on timeless issues that still speak to us.

The exhibition was created in a broader cooperation of several institutions and companies. The list of authors can be found here.

The first exhibition hall is concerned with the depiction of the life of Comenius with an emphasis on the social context of the 16th and 17th centuries. Visitors can walk together with Comenius and in a total of nine stops (themes), from Rudolphian Prague to Amsterdam of the Golden Age of the Netherlands, they can accompany him to his studies, observe the beginnings of his career as a teacher, the difficult period after the Battle of White Mountain and the time spent in exile and, moreover, they may ask themselves similar questions as Comenius did. 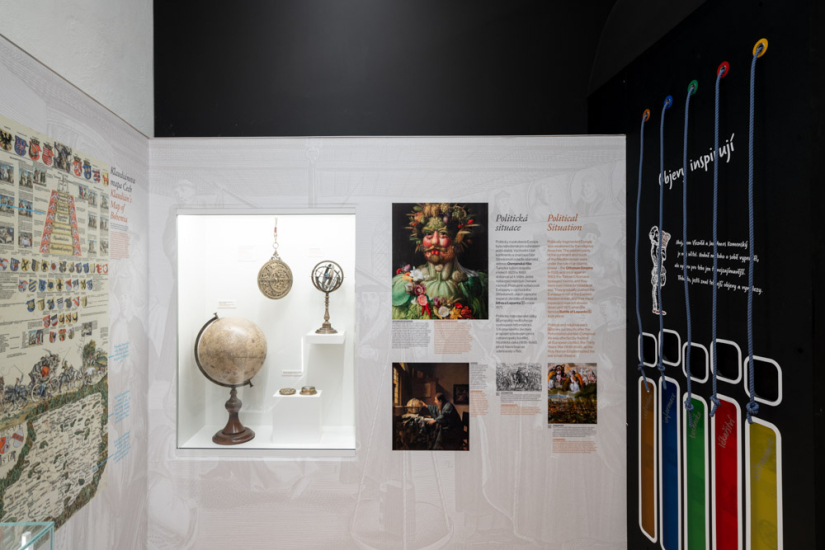 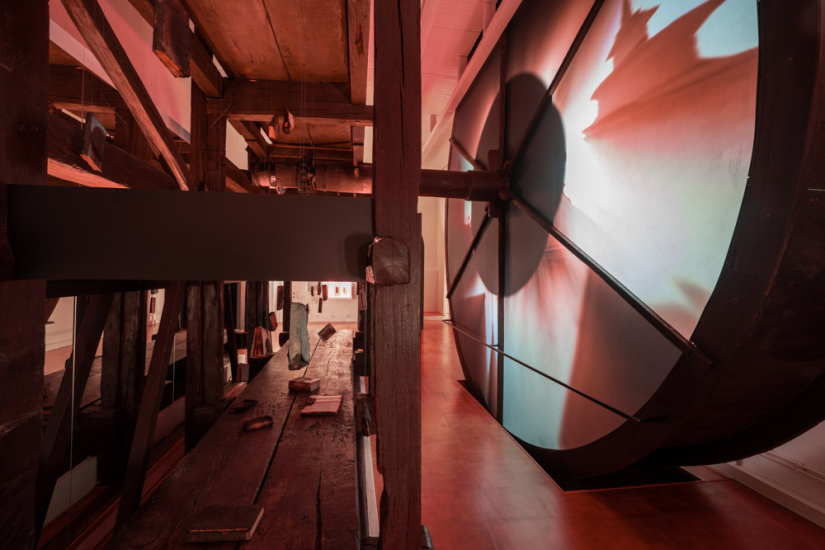 The information-dense hall is complemented by rich visual material that brings to light the period art and presents personalities who played an important role in Comenius’ life, or the places where he stayed. There are also three-dimensional objects on display and the so-called children’s line running through the hall creates an interactive element of the area. 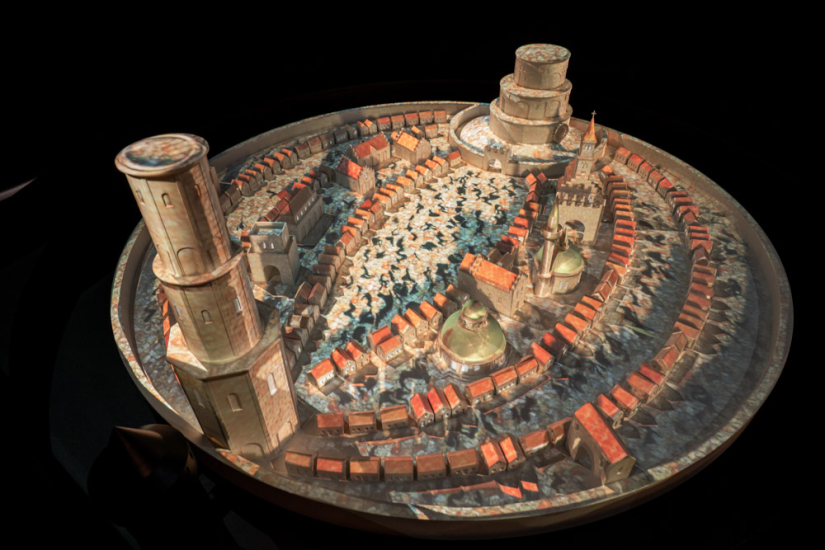 The second exhibition hall is filled with a three-dimensional model of the city-world based on a drawing, the author of which may be Comenius himself. Within a unique audiovisual projection, where scenes from the Labyrinth are projected directly onto the model using UV mapping, it is shown that the city may appear organized and orderly at first glance, but upon closer examination the hopelessness of human destinies emerges. 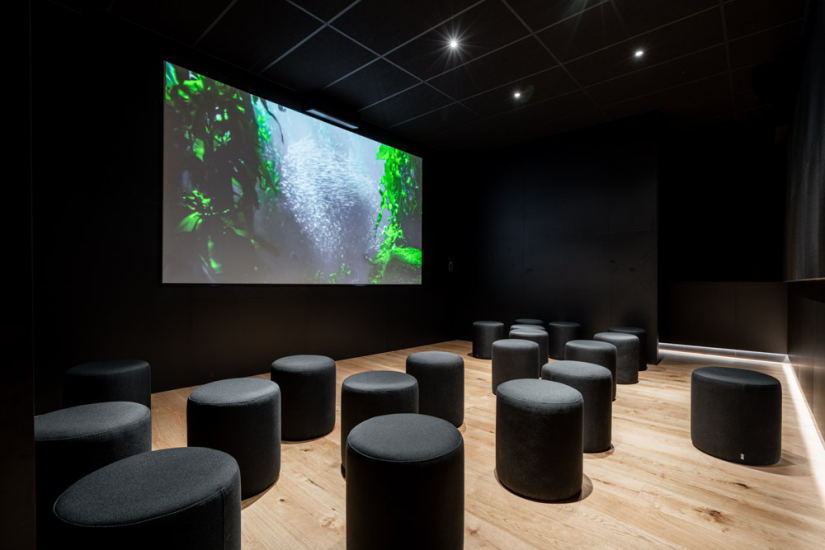 The third part of the exhibition is another place to gain a deeper understanding of Comenius’ work, albeit it is presented in multimedia form again. The hall called Theatrum, i.e. a kind of theater within the exposition, is named after Comenius’ encyclopedic work Theater of All Things (Theatrum universtitatis rerum). And it is precisely this early manuscript of John Amos that served as the subject of the projected film.

Before entering the fourth part, which is based on Comenius’ books and their stories, the visitors can discover the basics of a printer’s work through a manual printing press and come to realize that book printing in the time of Comenius was much more difficult than today. Comenius in Print, then, brings attention to the fact that in more than half a century, John Amos created an extensive and multi-layered work. He authored philosophical, theological, political, pedagogical, historical and poetic works. 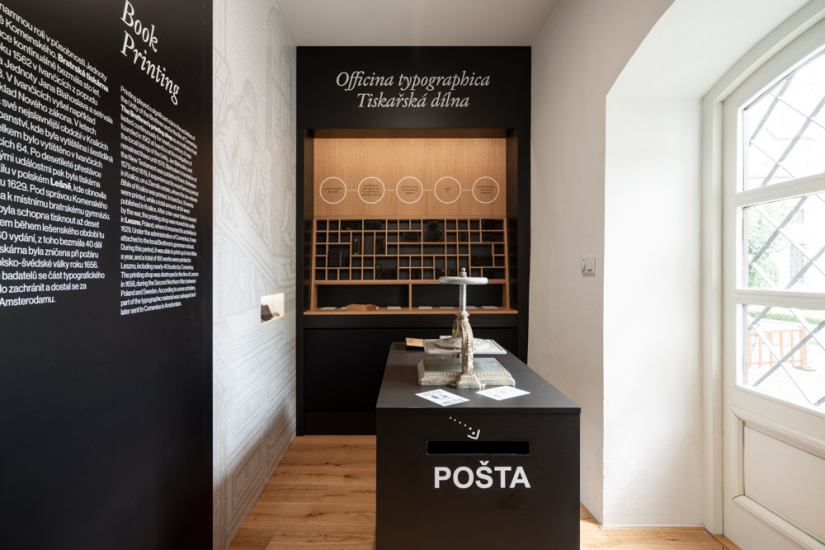 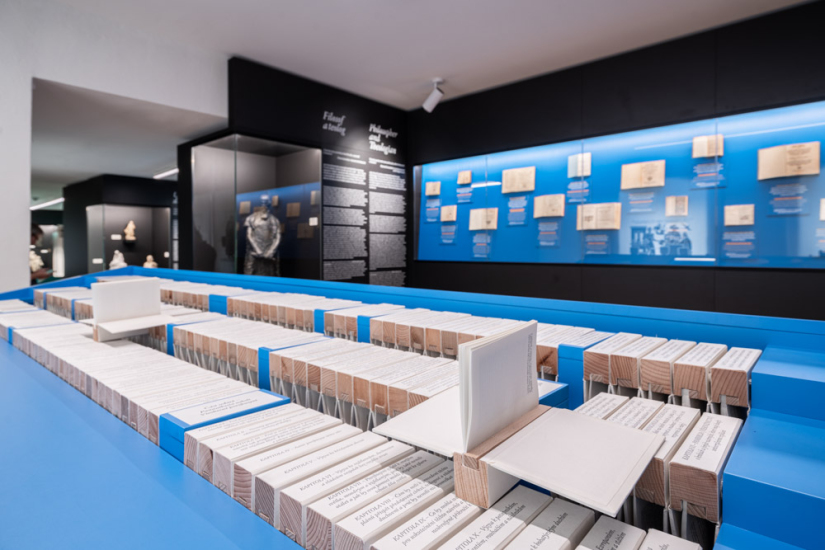 Comenius as an educationalist tries to find an effective method of upbringing and education. Comenius as a man of letters uses literature as a means of addressing the public, but at the same time as a space for coming to terms with the personal tragedies that occurred in his life. Finally, Comenius’ allegiance to the Unity of the Brethren and deeply rooted faith in God are the basics of the topic Comenius – philosopher and theologian. 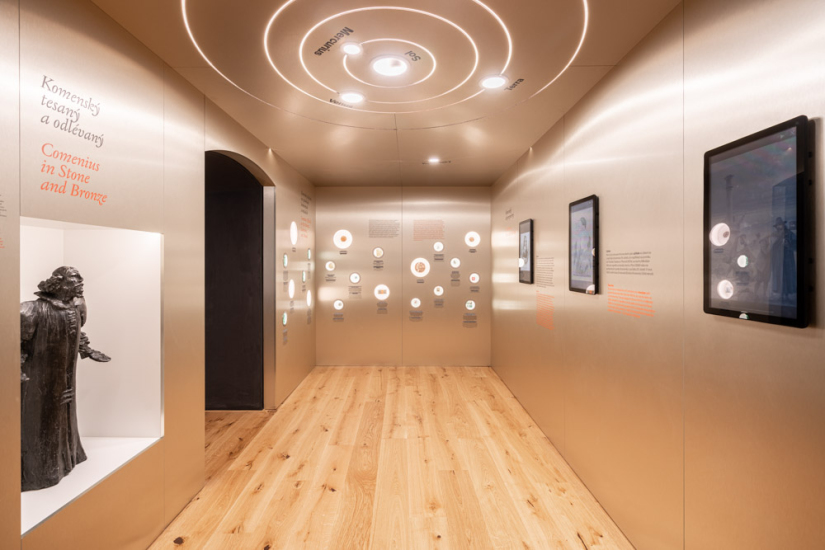 The last exhibition hall is symbolically dedicated not to a word, but to an image. The fifth part entitled Comenius depicted presents the changes in the visual representation of John Amos from the 17th century to the present day.

Since Comenius is an easily recognizable figure, he is often placed on banknotes, stamps, but he is also often the target of humorous caricatures. Nevertheless, this belongs to the perception of Comenius, a native of Moravia, who, despite he had found himself alone on the stage of the world, never gave up and fought for the well-being of his church and his nation.

2) School by Play - the Old School and the Informatorium

The School by Play exhibition is partly based on the contrast between the old and the new school. When observing Comenius′ principles of pedagogy and didactics thoroughly, we will come to the conclusion that the two schools are identical. A row of desks dating from the 2nd half of the 19th and the 1st half of the 20th centuries stands in the middle of an old classroom. Both sides of the classroom are lined with teaching aids used in different fields of science between the 1930s and 1950s.

The new classroom is often used for programmes for children, they can learn about biology, history of the region or the physics of Comenius′s time. The multifunctional hall called Informatorium (the name is derived from Comenius′ concept of lecturing, instructing or giving advice), above all, is used to present the educational programmes. Their content is based on the support of independent and active approach of the child visitor to acquisition of knowledge and development of thinking. 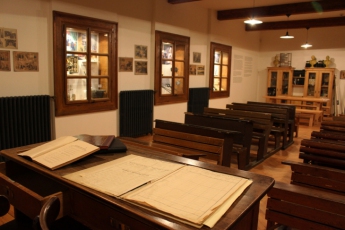 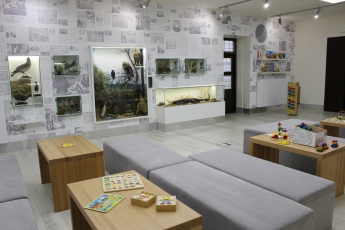