The Japanese Garden in the Museum

On 6 November 1998, a Japanese karesansui (i.e. dry) garden was opened in the courtyard of the main building of John Amos Comenius Museum. Commissioned by the Town Hall of Uherský Brod, it was set up on the spot in three days by landscape architects from the Japanese town of Tsukiono. The Japanese garden consists of the spring, lantern, dry well, stones on the pavement, and wooden blocks. 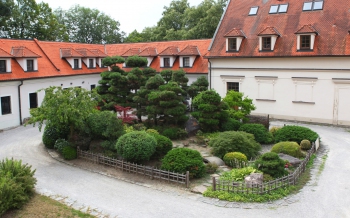 The Kare-sansui Garden (‘dry garden’): The word sansui means ‘mountains and a river’ and symbolizes a mountainous landscape with trees and a river. Such landscape has been a frequent theme of Far Eastern fine arts and poetry since the Muromachi period (1338–1572). While a sansui-style garden contains a brooklet or pond, thus being actually a miniature landscape, the kare-sansui is a type of a garden where water is only suggested by gravel or sand (kare means dry). The big stones, which are getting smaller the nearer they lie to the valley, represent mountains.

The Spring (tsukubai): Its name is derived from the verb tsukubau – to crouch, bend down. It is often found in the gardens of tea houses, near the entrance; both the entrance and the spring are deliberately located low down to make every tea ceremony participant bend down and show that he does not have a sword that does not go with the ceremony (nowadays it is obviously only symbolic). Everyone wash their hands at the spring to imply cleanliness, like before entering a temple. The stone in front of the spring is called mae-ishi (the front stone) and serves as a step or a platform; the stone on the right, called yu-oke-ishi, serves as a rest for a bamboo ladle; while that on the left, called teshoku-ishi, as a rest for a candle, hand lantern, or other sources of light.

The Lantern (tóró): Originally used as a lantern on graves, in shrines and in temples, it later became a part of gardens. The type of lantern that is used in Uherský Brod is called oribe after Furuta Oribe, on whose grave a lantern of this shape first appeared. The lantern is often used in combination with the spring to make it visible in the dark (once again, nowadays only symbolically). A candle used to be placed into the lantern and the lantern is supposed to be slightly shaded by a tree branch to make light softer, or less bright, and the space behind the lantern look larger. 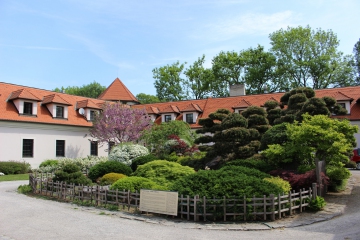 The Dry Well (izutsu): It is a symbol of home; water symbolically flows down the mountains and is used by families in the valley. There are four stones called hashibasami-no-ishi around the well, two smaller and two larger ones, always laid diagonally.

Stones on the pavement (tobi-ishi): Their role is to protect people’s shoes from mud. The path is intentionally curvy to look like a country path. Besides, a winding path seems to be longer, more interesting and tempting.

Wooden blocks (rangui): They symbolize a palisade on a lakeshore or riverbank. Wood is used here instead of stones to make the garden more varied and fancy.